Most of Alberts and my outfits are made up of replicas. Most of the replicas are either custom made or hand made by me. I made The Order Of the Garter arm garter, Queen Victoria's Lesser George, George Iv diadem and a replica of Queen Victoria's petticoat from 1840.
Albert's replicas currently consist of a replica of Prince Albert's: 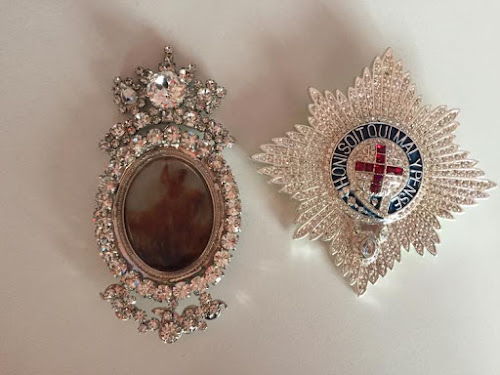 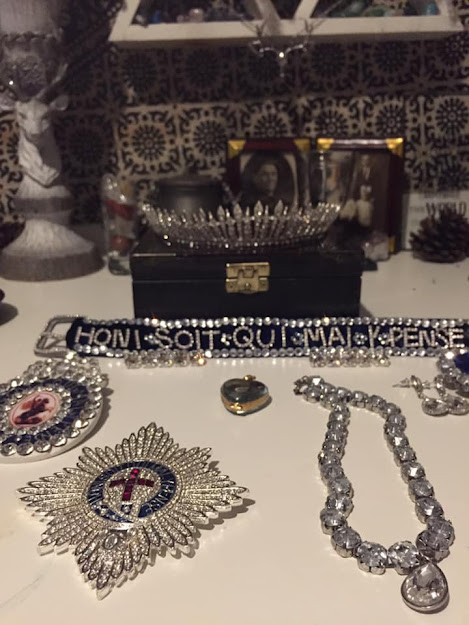 Introduction of the young Queen

For a few years now i have been portraying Victoria, it first started when my dear friend Pete from The Rochester Dickens Festival suggested I portray Victoria. It began with a little “ Victorian “ ( more of an 1980’s party dress that was over exaggerated ) Pete gave me a little gold and sapphire crown, a blue heart necklace and some beautiful earrings. That was it i thought i was set to be Victoria but oh how wrong i was ! The months running up to the festival I began to do a lot of research on Victoria and the fashion of the Dickens era. The Dickens Festival had a mix of women in crinolines, petticoats and bustles ! All these types of styles and dresses really overwhelmed me and it took me quite a bit of time to find the right time line of dress I wanted to follow. I eventually found the 1840’s, a very big sum of years for Victoria including; her wedding, her becoming the first monarch to ride a steam train, Victoria's first child, and Victoria's first assassination attempt. Victoria reigned for a very long time and was the longest reigning monarch and had a very eventful life.
Many people see the plump widow in her weeds when they are reminded of Queen Victoria, my goal is to portray Victoria in a whole new light. I wanted to show Victoria as the music, dance, food lover and thrill seeking queen she was. Even in Victoria's later life she loved to drink and write, she remained in black for the rest of her life when her darling Albert passed but she still had a spark of the Young Queen she once was. I want to focus on the Young Victoria in this blog. Portraying the Queen was not only taking on the role of a monarch but as a wife, mother and party lover. I also give educational talks but my favourite has to be using Victoria's memories as if my own, Victoria wrote around 2,500 words per day and only stopped writing till a couple of days before her death. She is one of the most recorded monarchs in history, i am sure Victoria knew her diaries would one day be read by someone that was not herself this is perhaps why she added so much intimate details in her diary. Sadly after Victoria's death her daughter Louise re-wrote all of Victoria’s dairies so not all of the words are Victoria’s. 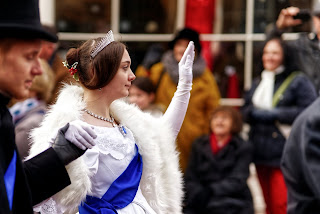 To complete my Order Of The Garter set I needed to have the arm band. Women have been members of The Garter since early days, as have forei...

Young Queen Victoria
Dozens of trips to museums and royal residences sparked an interest to Amelia, she began looking into local Victorian events and came across Rochester Dickens. Amelia attended Rochester Dickens as a normal Victorian lady; her friend noticed she would fit the royal role, prompting her to play Queen Victoria Amelia finally gave in and took on the role. With months of research, sewing and making Amelia finally had her costume ready. When Amelia put on her first dress she knew this is what she wanted, to bring history back to life to young and old. Amelia created this website to reach more people and to carry on bringing Victoria and her darling Albert back to life, with exact replicas of Victoria's jewels and dresses Amelia has began to bring light back to Victoria after more than a hundred years after her death.